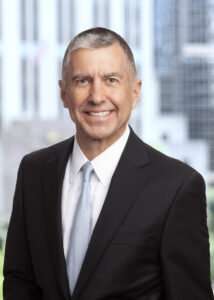 Gary’s practice is limited to high-stakes patent and trademark infringement litigation where he acts as either lead or local counsel to attorneys not admitted to the Federal Courts in Massachusetts, New Hampshire and Maine.

Gary was admitted as an attorney at the age of 24 in 1984, the same year he graduated from law school with a Doctor of Jurisprudence with Honors. He holds a Bachelor of Science degree in both Chemistry and Biology that he received in 1981. He is admitted as a registered attorney at the U.S. Patent and Trademark Office in Washington, DC. Gary started Lambert Shortell & Connaughton in 1989 after having served for three years as a criminal prosecutor and defense counsel on active duty in the U.S. Marine Corps and after having worked for two years in a large law firm in Boston.

Gary has obtained hundreds of patents and registered trademarks for his clients in areas as diverse as mechanical, electrical, software, business methods, biotechnology, computer systems, musical instruments, energy and environmental innovations. Additionally, he has an extensive and unique litigation background, having successfully tried hundreds of jury and bench trials in state and federal courts. Gary tried five jury trials before he graduated from law school and he tried a capital, double-murder case at the age of 27. Gary has a special interest and expertise in the energy and environmental areas of patent law and worked on the Energy and Natural Resources Committee of the New Hampshire State Senate as the State Senator representing Nashua from 2010-2012.

Gary’s list of clients range from Fortune 500 companies such as Wal-Mart, Inc. and Polaroid, Inc. to many midsize/small businesses and individuals. He has represented clients in patent and trademark litigation against large corporations such as Ford Motor Company and individual infringers.

Gary has been extremely successful at resolving many intellectual property disputes between patent/trademark/copyright owners and alleged infringers, either by litigation, mediation, arbitration or settlement.

In addition to being the founder of and managing partner at Lambert Shortell & Connaughton, Gary served in the U.S. Marine Corps Reserve for over 35 years and retired in 2014. Promoted to Colonel in 2003, Gary was mobilized during Operations Desert Shield/Storm, Noble Eagle, Enduring Freedom and Iraqi Freedom. From June 2004 to January 2005, he served as Deputy Legal Counsel and, for a time, the Acting Chief Legal Counsel to the Commanding General of the Multi-National Force – Iraq in Baghdad, Iraq. Gary was awarded the Bronze Star Medal for his service in Iraq.

Professional, Friendly and Top IP Attorney A++ Being a first-time product owner and being hit with baseless and frivolous copyright infringement lawsuit, I decided to look for a top-rated attorney. Gary Lambert himself spoke for close to 45 minutes with me and I noticed that he was being very sincere and from the heart. He was very professional and started to work with me without hesitation. Gary was always attentive and always responded all my emails and phone calls. I highly recommend Gary an… END_OF_DOCUMENT_TOKEN_TO_BE_REPLACED

Hi my name is Ethan & I have utilized the services of Lambert & Associates for several years now. Over that period, they have always been very kind & courteous every time we speak. They listen to everything & give me great advise. This has helped me make very important decisions. I highly recommended them to any inventor looking for great success! Thank You!

Very Satisfied. I came in for a consultation and was very pleased with the straight forward approach taken by Lambert. As I grow my startup, I will be utilizing this firm for all our patent needs.

Met with Gary about some trademarks armed only with my knowledge from the USPTO site, which I confirmed isn’t enough. He was very helpful and easy to understand as he highlighted the key points. I hadn’t been to the web site and found the pages there also very useful. We are currently moving forward and working on a trademark worksheet. I’d highly recommend the consult and the firm.

Mr. Shortell calmed my nerves and made it easy to feel comfortable talking through my situation. Not pushy at all, and best listener out of any consult I have had so far. If I decide to move forward, it will definitely be with this firm. Thank you!!!

Very nice to meet with David. No stress. Information given is clear and to the point. I definitely recommend Lambert and Associates to anyone looking for Legal help. They also have attorneys with chemical and mechanical background so technical write up would not be an issue for them to translate.

Owner/Inventor. Excellent follow-up and clear explanations were given. Seemed like an honest assessment of my situation. Appreciated the candor and efficiency.

It was great meeting with Gary. I entered his office with some interesting ideas along with a plan and Gary helped me put my vision into an even clearer view. Thank you!

Highly recommended! I was in need of an affordable second opinion, and I’m so glad I called these guys. They were very thorough, timely, and upfront about what to expect. Then they went above and beyond all expectations, and actually found what a previous Atty. had missed completely! Bravo!!!!

Quality work. This is only my second time dealing with a law firm, and I feel fully confident that Mr. Lambert has treated my concerns and my case with all the attention and expertise that it deserves. I look forward to working with his business in the future.

I checked every box on this review, not to be nice, but because they do hit it out of the park. We worked with Brendan on 10 different trademarks and certification marks. He was very responsive, spent time with us, and really understands the area. Their prices are quite fair and they are not interested in spending extra time on things that just increase billings. I have used them more than once and they will absolutely be my first call for any other items in their wheelhouse.

Beyond my expectations, very friendly and helpful. Looking forward to working with Lambert & Associates in the future.

My experience with Lambert Shortell & Connaughton law firm has been beyond exceptional. I had such a great experience with this firm that I wanted to write a review. Bottom line – this is a great law firm for any IP patent and litigation related cases. I was very nervous and clueless after been served with a baseless copyright lawsuit. After learning about this world-class IP law firm, I decide to reach out. I spoke to Gary Lambert for over 45 minutes, however, within the first 10 minutes I felt… END_OF_DOCUMENT_TOKEN_TO_BE_REPLACED

Patient and informative! Mr. Shortell calmed my nerves and made it easy to feel comfortable talking through my situation. Not pushy at all, and best listener out of any consult I have had so far. If I decide to move forward, it will definitely be with this firm. Thank you!!!

I feel relieved. I had an initial consultation with Gary Lambert regarding a copyright infringement claim. I found him to be down to earth, sincere, and highly knowledgeable. He explained the relevant laws to me and helped me understand my options. At this time, we are going to try to work the matter out on our own, but should legal representation become necessary, we will definitely be back to hire attorney Lambert. He is exactly the kind of professional I’d want in my corner!

I’ve worked with Lambert, Shortell & Connaughton since the inception of my business in 2010. For the past 10 years they have been knowledgeable, professional, responsive, intuitive and no-nonsense. I’ve obtained multiple design patents, utility patents and trademarks over the years thanks to their persistence and expertise and I would highly recommend this firm.

Patent options discussed. To start with the conversation relieved the stress I had been putting on myself. Secondly I received prompt service and some general guidance to help move forward. The conversation was easy going non-intimidating, you know he must have many conversations with people who have a big idea but I never felt that way.

The information on this website is for general informational purposes only. Nothing on this site should be taken as legal advice for any individual case or situation. This information is not intended to create, and receipt or viewing does not constitute, an attorney-client relationship.